The Great Divide – Passive vs. Active

A Market with FANGS

A recent Wall Street Journal article addressed the significant change in 2015 from actively managed funds to indexing. For the first time since the 2008 financial crisis, the industry saw an outflow from professionally managed mutual funds. According to Morningstar, in 2015 active funds saw an outflow of $207 billion while their passive counterparts saw a gain of $413 billion. This suggests that not only was new money pouring into index funds, but also many actively managed funds were liquidated to further increase indexed investments. The trend is prevalent in both equity and fixed income. 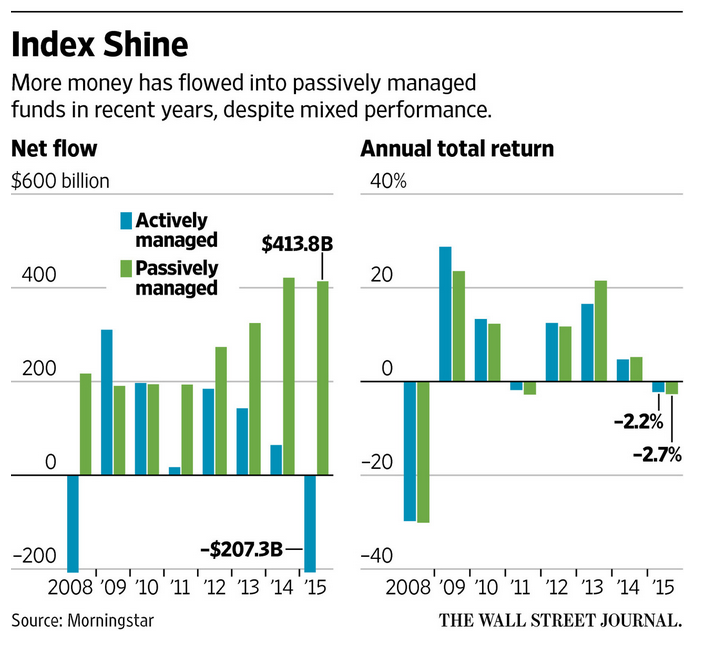 Is there a right answer?

Are the days of money managers numbered? Alternatively, was the herd shifting in 2015 a signal that stock selection will again reign supreme in the coming years? There are trillions of dollars in active management, and trillions in passive management. There is no clear “right or wrong.” We see advantages and disadvantages of both and believe making informed and educated decisions on the correct path for a specific pool of assets is the most important issue.

It is vastly publicized that active managers cannot consistently outperform their passive indexes. Not even Warren Buffet has a perfect record against the market. However, his fund has vastly outperformed the market over time. Is annual outperformance the key, or is cumulative performance more important?

In a recent study of this topic, Equitas examined historic performance over a 10 year cycle of active U.S. equity managers’ net returns vs. the S&P 500 index with no fee. (You cannot invest directly into an index and an index fund would have some small fee included.) While the study did not look at multiple rolling 10 year cycles, the time frame we choose during this decade should have, for the most part favored the index. We used the ten years from January 1, 2004 until December 31, 2013. This time frame avoids the great tech bust years of 2000-2003 but does include the financial crisis of 2008. In the exhibit below we list the annual returns for the S&P 500 for each year, follow by a cross section of popular actively managed funds. A few directly compare to the index and a few are designed to be more balanced funds, typically reflecting lower but less volatile returns.

If we subtract the index performance from every manager, this leaves us with each manager’s excess return. With this, we can determine the number of successful years active managers outperformed the index. These are shown in the exhibit on the next page. As you will see, not a single fund consistently beat the index over the ten year time frame. In fact, the “batting average” is less than 50% for some of the funds. Looking at this metric, indexing seems to demonstrate very positive characteristics as a consistent investment alternative.

This was somewhat surprising considering the annual “misses” of the group so we asked our analysts to evaluate the entire universe of funds for this time frame. Our research criteria was as follows: We excluded all bond funds, high yield/bank loan funds, international and emerging market funds, preferred stock, alternatives and money markets from the Morningstar universe, but counted every share class net of all expenses from the highest expense ratios to the lowest and included all the index funds. The filtering process produced 8,049 funds with a track record covering this 10 year period. The number of funds that outperformed the index was 4,170 or 52% (and these results contain all the index funds). This number is significantly larger than most investors expect and suggests that many active managers can add value to a portfolio over time, if the managers are given time, but will not beat the market yearly.

Why Have Active Managers Underperformed Lately?

The market in 2015 was incredibly concentrated. In a market of mostly losers, a small group of four stocks – Facebook, Amazon, Netflix, and Google (known as the FANGs) – averaged returns of 83%. Removing these four very large companies from the index would drop the return from a barely positive 1.38%, into negative territory. This is important because good active managers typically practice diversification. They avoid being over-exposed to certain sectors or individual stocks. In the vast majority of market environments, this reduces risk. However, in 2015, active managers who were underweight these major companies were bit by the FANGs. 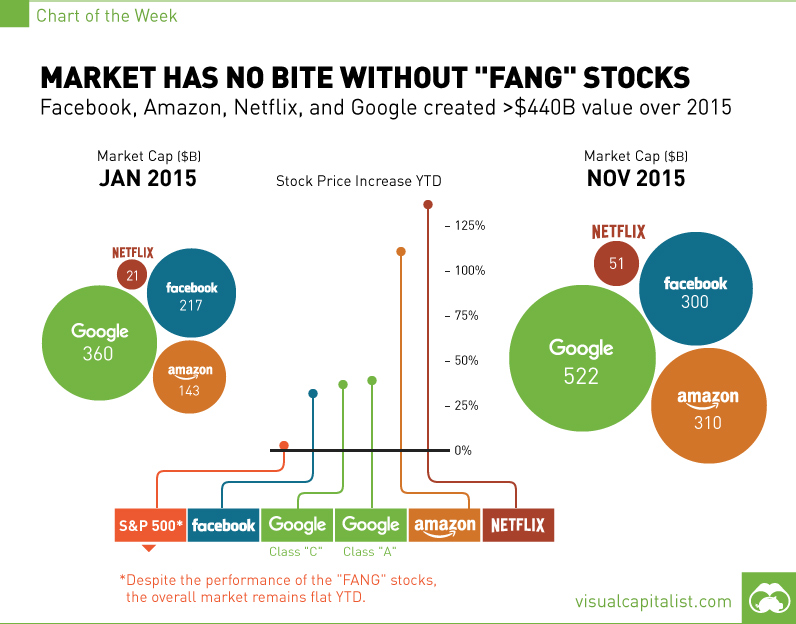 In 2015, the FANG stocks increased in price for largely technical reasons (namely momentum), as opposed to fundamental reasons (earnings). For example, Netflix ended the year with a Price/Earnings ratio (a measure of how “expensive” a stock is compared to its earnings) over 400 while the broad market ended with a P/E of 18.

In 2016 however, the reversal of this momentum trade has thus far helped push markets even further down as Netflix alone has dropped nearly 25% so far in 2016. Going back 20 years, the P/E ratio of the total market has ranged between 12.5 and 30. The recent market pullback has been mostly valuation based, as the average P/E of the market has dropped from 18.25 to 16.43 today. The last time the market was this cheap was after 3rd Quarter 2013. Then, the S&P 500 charged upwards nearly 400 points from 1,681 to 2,067.89 by the end of 1st Quarter 2015. Since then, markets have remained in the current choppy environment.

There is no clear cut right or wrong answer to the active/passive debate. Based on the market environment, the index ranking in the money manager universe swings back and forth and may be in the 15th percentile, or the 85th percentile. This means that at times the index beats 85% of the active managers, and other times 85% of active managers beat the index.

Active managers can more easily play defense in times of market turmoil, but passive indexes are hard to beat in strong markets. Passive management carries little cash and is usually cap weighted, meaning the returns can be influenced by the concentration of the largest companies in the index such as the FANGs. Active managers often carry some cash and tend to be more equally weighted; limiting the risks and at times the benefits of a concentrated portfolio. Passive management also avoids the risk of manager selection or picking the wrong active manager.
For board of directors benchmarking investment returns annually against an index, the passive approach should keep them close to those benchmarks less the internal expenses of the passive funds. This approach has less tracking error and is the best for investors who want more predictability in terms of relative performance to an index, or investors that do not want to take the additional risk of picking a manager who may or may not outperform the index. For investors focused on cumulative growth over longer-term time horizons, and who can tolerate the inevitable periods of underperformance, active managers can play a valuable role in portfolio construction. They do have the potential to outperform an index and make more money over time, like Warren Buffett. However, Buffett has experienced times (like 1999) when he has been 50 percentage points (5,000 basis points) behind the S&P500. Would that bother you?

Buffett is a good example of the use of both active and passive management. The Oracle of Omaha is arguably one of the best active managers in history and does not approach investing passively. Yet, he recommends that most investors should invest in passive index funds! Why is that? Is this a double standard? Well, in a way, yes there is a double standard. Buffet understands that certain investors have the knowledge and inclination to embrace an actively managed approach to investing, but many others do not.

Buffett recognizes that neither approach is wrong and it depends on the nature of the investor. Human nature has shown that most people make decisions driven by emotion. Investors often “zig” when they should “zag”. Many investors may be more inclined to invest in an environment that offers higher levels of predictability, and therefore, should invest in index funds. Index investing removes the possibility of self-inflicted mistakes and lets the general market make you money over time without all the uncertainty of active investing.

Which type of investor are you?