Investors are facing stiff challenges as 2016 opened with a bang. Actually, more like an explosion… of selling; as if someone flipped a switch at the end of 2015 and released an onslaught of angry bears. There has been much press early this year about the potential for a record negative January to start the year. While markets are often emotional, fundamentals did not change just because we moved the time clock up a notch.

The simple question everyone is asking is, “Why?” If you look at the standard answers in the media and from many in the financial world you will see the same explanations: China growth uncertainty, extensive declines in oil and commodity prices, the Federal Reserve tightening, global geopolitical uncertainties, and a number of additional irritants like the strength of the US dollar, problems in Emerging Markets, slower recoveries than anticipated, potential additional interest rate hikes by the Federal Reserve and fair valuations for our equity markets. While these all have some relevance, they were as evident in December as they are now. So why the big selloff to start this year and where do we go from here?

Financial markets are examples of the pure economic laws of supply and demand. While there is always a buyer for every seller, the price that is paid for an asset reflects the willingness of both sides to establish an acceptable value. In the month of January, there has been significantly more willingness by the sellers to part with assets at any price. Volume has been extremely high and markets have been unusually linked to oil prices even though, in theory, low energy prices offer valuable cost savings and should be beneficial to many other industries. This disconnect could be a clue as to what is actually happening to open 2016.
Many of the major oil producing countries have very high social welfare costs. In other words, they provide significant benefits to their populace. These have historically been funded by the sale of oil. In fact, for years they enjoyed excessive revenue flows and placed those excess reserves in Sovereign Wealth Funds. According to Sovereign Wealth Fund Institute, Sovereign Wealth Funds held approximately $7.1 trillion dollars in assets as of March 2015 with over $4 trillion from the oil producing nations. Norway, Abu Dhabi, and Saudi Arabia lead the pack with between $800 and $600 billion each. To put that in perspective, according to the World Bank, $7.1 trillion is larger than the total value of any single stock market in the world except the United States and is larger than the combined values of the markets in Germany, France and the United Kingdom. So what would happen if a country’s declining oil revenue cannot fund their domestic obligations? Perhaps, tapping their “rainy day” sovereign wealth fund is the answer. This would create huge imbalances in the normal supply and demand curves and drive financial asset prices down. It also would connect the short term movements of oil with the significant indiscriminate declines in the global equity markets that should benefit from cheaper oil.

If oil prices remain low and Sovereign Wealth Funds continue to be forced to indiscriminately liquidate from time to time to deliver promised benefits to their populaces, we could see occasional bouts of volatility that will drive financial assets to very attractive levels and could cap stock market valuations.

As an example from the CIA World Fact Book, Saudi Arabia has an oil-based economy with strong government controls over major economic activities. It possesses about 16% of the world’s proven petroleum reserves, ranks as the largest exporter of petroleum, and plays a leading role in OPEC. The petroleum sector accounts for roughly 80% of budget revenues, 45% of GDP, and 90% of export earnings. In 2014 the Kingdom ran its first budget deficit since 2009, and faces budget deficits for the foreseeable future because it requires an oil price greater than $100 per barrel to balance its budget. Although the Kingdom can finance high deficits for several years by drawing down its considerable foreign assets or borrowing, it probably will begin to reduce capital spending if oil prices stay low through the next year. However, the combined selling from the sovereign wealth reserves from all of the oil producing nations can constitute significant selling pressure in all sectors of global stock and bond markets.

World production and consumption of oil has remained surprisingly firm the last four years as seen in this JPMorgan table. The oversupply for the last three years is estimated to total 3.1 million barrels per day. The resulting oil price fluctuation is surprising. 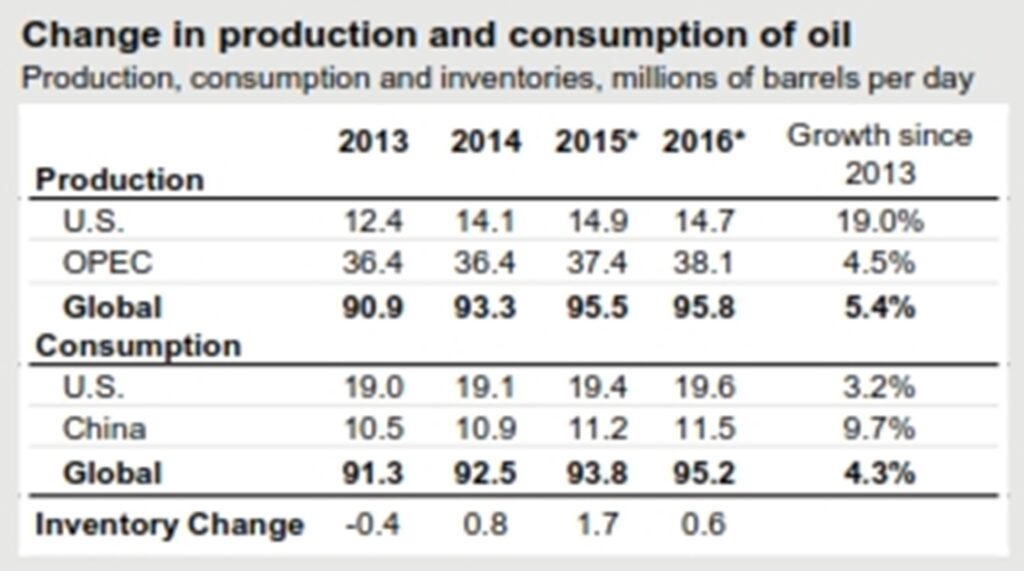 Declining commodity prices, the global strength of the dollar, and the slowdown in the growth of the second largest economy in the world, China, could bring on the risk of worldwide deflation. Even the most seasoned financial professionals have never had to manage through a deflationary cycle. The biggest deflationary cycle of our history was the 1930s following the Great Depression. But that was demand driven deflation where we had major unemployment and lacked the resources to purchase goods and services causing prices to decline. Today, we have strong employment in the United States and improving employment in Europe. We are 7 years out of the Great Recession caused by the financial crisis and our economy is strong and corporate America even stronger. China has been the driver behind the commodity boom and companies expanded production of raw materials to meet the demand. China is now overbuilt and the huge demand has slackened causing supply surpluses that have placed significant pressure on the price curve creating a potential deflationary pricing scenario. This potential deflationary cycle could also be evidenced by the low yields on fixed income assets. If not deflation, we could certainly see a long-term cycle of low pricing. We have only lived in inflation but there have been long cycles of lower prices in our country, all of which, unlike the 1930s, were not damaging to the economy.

Building a Portfolio in Deflationary Economy

Managing through a market of low or no inflation and consequently, slower corporate growth, could mean a repricing of financial assets that would deliver lower future growth prospects. If we have periods of deflation, say -2%, a 10 year treasury yielding 2% would be a 4% real rate of return since each dollar would buy 2% more goods and services. A rise of 5% in equities would be reflective of a positive 7% return adjusting for that same -2% deflation.

In this environment we would continue to favor conservative equity positions with strong balance sheets and attractive embedded returns in the form of rising dividends. This approach delivers real return annually without regard to price appreciation and offers some downside protection through the dividend yield. Industries and companies that can grow their businesses through increased demand such as health care or technology could also offer attractive metrics.

While fixed income returns should be limited and rates perhaps more suppressed than most of the world anticipated a couple of years ago (including us), intermediate term maturities could provide a measure of defense as well as small positive returns.