These are no doubt the “interesting times” from the old Chinese proverb. As discussed before, bull markets die from trigger points and not old age, and we experienced both in just 20 days. On February 20th the S&P 500 was 3,400 and on March 23rd it was 2,200. That was a 35% drop in 20 trading days. We entered a war with 3 fronts; the Covid-19 disease, the energy price collapse, and a contraction of all consumer-based economies. Although all 3 are scary, the cure may be worse than the disease.

Double digit down years in the stock market are rare. In the last 100 years, the Dow Jones market index was up 70 years and down 30. Only 16 years out of the last 100 was the market down in double digits and it was down greater than 20% in only 6. Declines both expose risk and reveal opportunities. I will always remember 9/11/01 when 3 terrorist flown airplanes crashed into buildings. A fear of flying gripped the country. However, the period after the crashes was one of the safest times to fly. The risky time was before the crashes. Remember, the lower the market goes, the lower the risk goes, and higher the opportunity goes.

For some examples, the virus is on the decline in China and South Korea and 98% of all listed Chinese companies are back in production. More than 75% of the S&P 500 companies have dividend yields higher than the US 10-year treasury yield. State and local pension plans have gone from an average of 60% equity to 40% in equity in the last 20 years creating pent up demand.

One discussion that always seems to arise is “It is different this time.” This fear of the unknown quells many investors into inactivity from the mysterious “difference.” Actually, it is always a little bit different every time, but the difference never negates the fundamental laws of the physics of investing.

The onset and spread of the coronavirus is expected to cause global GDP growth rates to be revised downward by economists. The International Monetary Fund (IMF) initially set its forecast for global growth in 2020 at 3.2%, up from 2.9% last year. The estimated cutbacks in China alone — where growth had been forecast at 6% for the year, but may come in closer to 2% — could reduce that 3.2% rate down toward 2.5%. After adding in the facts that Japan’s economy contracted 6% in the latest quarter and that Germany has been flirting with recession for the past year, it becomes clear that 2020 is likely to be the slowest year for growth since the financial crisis years of 2007-2009. The damage to the consumer-based economies and worker unemployment may be one of the worst ever. To spur growth, look for central banks around the globe to cut rates, and for governments to consider fiscal stimulus programs. The US government already launched a several trillion-dollar stimulus campaign.

Morningstar has 3 widely differing estimates for GDP entitled Base case, Bull case, and Bear case. All of these seem optimistic. 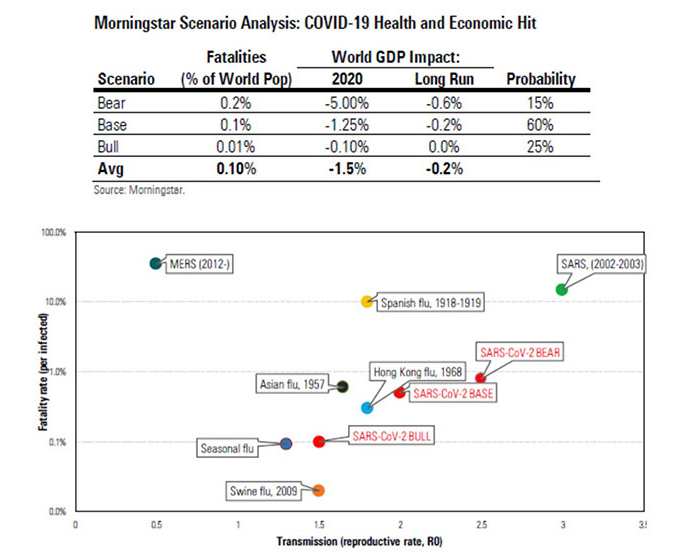 The process of ‘containment’ and ‘slowing the spread’ that is phasing in country by country will create major disruption in itself, irrespective of the seriousness of the virus spread alone. The widespread global panic of COVID-19 is unlike previous crisis and the traditional ‘crisis response’ approaches will not be sufficient. The US economy is approximately 70% consumer driven and the shutdown of the consumer could lead to substantial revenue disruption and a potential liquidity crisis. US automobile manufacturers have closed their factories, now accompanied by cinemas, restaurants, bars, malls, theaters, and even churches.

When put into context with 7 other recent pandemics, the picture does not look quite so dark. Wuhan, China (where the virus was first detected in December) reported just one new case for the second day in a row. The situation had improved enough that China sent medical supplies to hard hit France returning a favor by the French weeks ago. Death totals by country as of April 15th are: China 3,342 (if you believe it); Italy 21,645; Iran 4,777; France 17,167; UK 12,868; and the U.S. 32,588. This does not seem as severe a problem when you consider in the U.S. alone, the flu has caused an estimated 36 million illnesses, 370,000 hospitalization and 22,000 deaths this season, according to the Centers for Disease Control and Prevention (CDC). On average there are 291,000 to 646,000 deaths worldwide because of the regular flu, and 12,000 to 61,000 deaths in the U.S. every year, according to Johns Hopkins University. 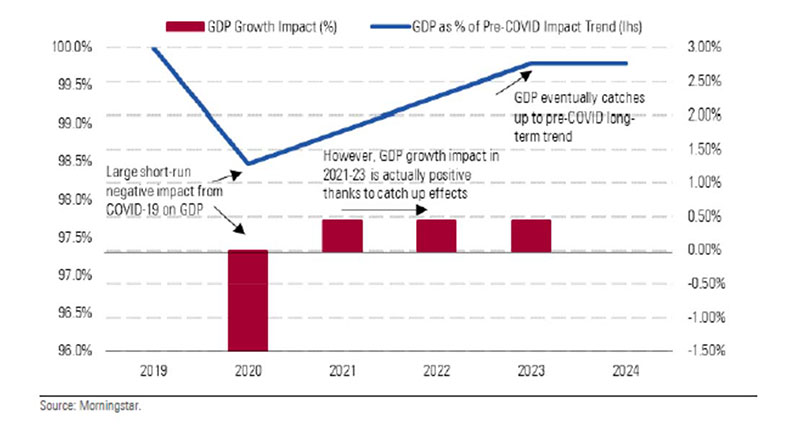 If the higher probability Base case evolves, this could be a V shaped decline and rebound. The Morningstar estimates still show lower but positive GDP which means it is technically not a recession (defined as two consecutive down quarters). This could create one of the best stock buying opportunities since 1987. The key may not lie within the coronavirus as much as it is the people’s reaction to the coronavirus.

The real risk in the stock market may be something else. As we have written in previous KnowRisk Reports, the markets are over 50% passive now with another 20-30% using automated computer, factor, and momentum trading systems.

Fundamental analysis is a smaller part of today’s market. This lowers daily liquidity and leads to higher volatility. While these factors exist, the effect on the stock market is permanent.

China’s GDP has been shifting gears for years as the country shifts from a manufacturing/export economy to a consumer driven economy like much of the developed countries. Here is the Morningstar estimate of the effect on their estimated GDP for China. This shows a significant and acute effect short term, but long term largely unaffected. 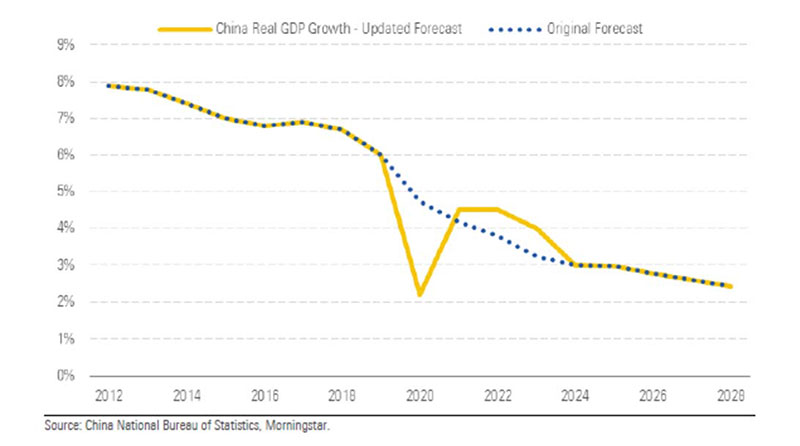 A Lesson from Another Disaster

I learned a valuable lesson from Hurricane Katrina. That disaster was contained within the Gulf Coast. There was little affect outside that region, but severe destruction within. I can remember the stress and strain of moving the business to Baton Rouge, finding office space and housing for a dozen families, moving my own family to the west coast, putting the kids in school there, commuting back and forth on the weekends, working some 20 hour days, and wondering how I was ever going to get it all back together.

In retrospect, I could have thought a little more out of my own personal box. I could have been out on a boat with our clients the Harbor Police taking people off of roofs and pulling people out of attics.

This coronavirus pandemic is a worldwide disaster. There is no place to escape, except the safe confines of your own home. Having lived through stress like this before, I feel calmer this time. I can see through the virus to the longer-term effects of the panic which is locking up the consumer driven economy. At times like this it is very easy to take the wrong steps out of fear. This time there will be no people to help off roofs, but there may be some that need to be helped down off a financial ledge.