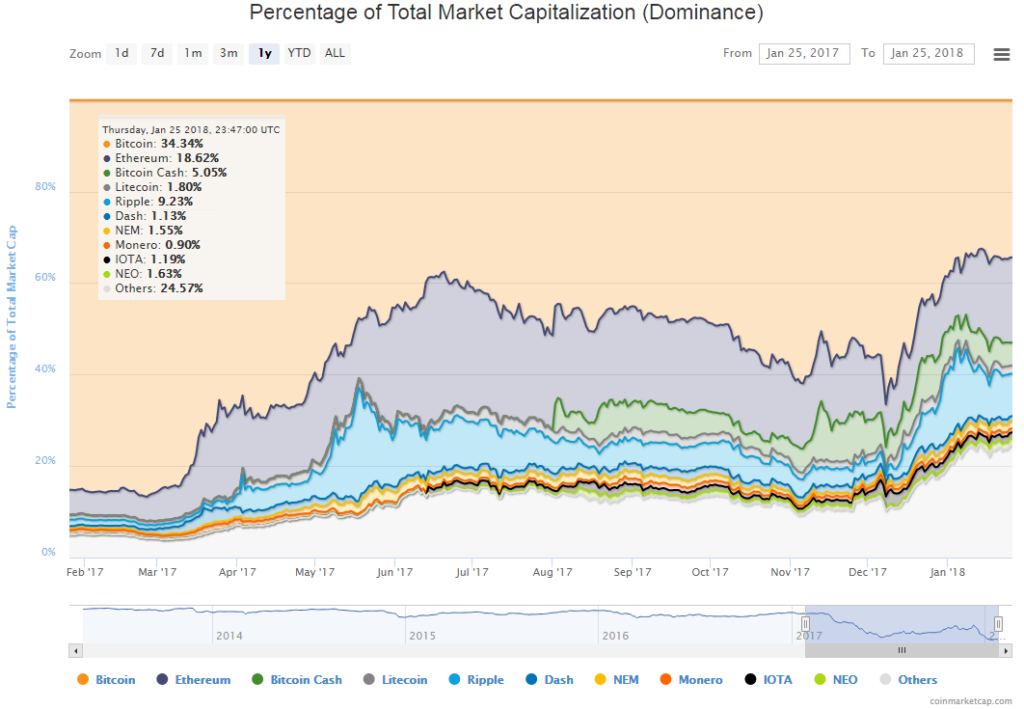 With the massive surge in price last year, Bitcoin and a plethora of other cryptocurrency investments have dominated recent chatter around investments among not just financial professionals, but also the general populace. Cryptocurrencies are a digital asset that uses cryptography, or the science of keeping information secret from third parties, to control the integrity of the asset system. The technology has been commented on by everyone from Jamie Dimon, head of JPMorgan Chase, to college students who now imagine themselves to be big time day traders. 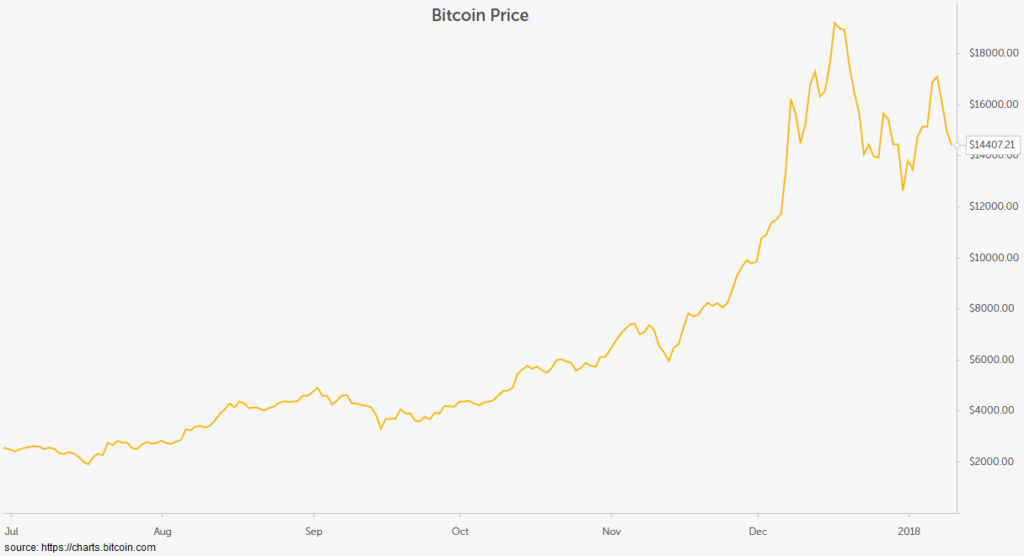 With a meteoric rise from $4,162 per Bitcoin (BTC) at end of 3rd Quarter 2017 to over $19,000 per BTC at its peak in December 2017, it is no surprise that this is a popular topic. With advocates of bitcoin claiming that it has the potential to replace our current financial system, we thought it was time to cover the nuts and bolts of Bitcoin in this Quarter’s KnowRisk report.

Bitcoin was invented by the unknown entity currently called “Satoshi Nakamoto.” In October 2008, the very middle of the Great Financial Crisis, Satoshi published a white paper that criticized the centralization of online commerce by third party financial institutions. He was very critical of the fractional reserve system and saw his creation of Bitcoin as a way to attack it. Instead of a third party trust-based model, he designed a peer-to-peer system based on cryptography and “proof of work.” The digital ledger controlled by this peer-to-peer system is known as the “blockchain” and Bitcoin is the cryptocurrency with the largest market cap that uses this technology. An important function of his design sought to give any would-be attackers a higher incentive to act “honestly” rather than for their own dishonest benefit. Bitcoin, thus, is ultimately a payment processing network which is often compared to the likes of Visa and Western Union. 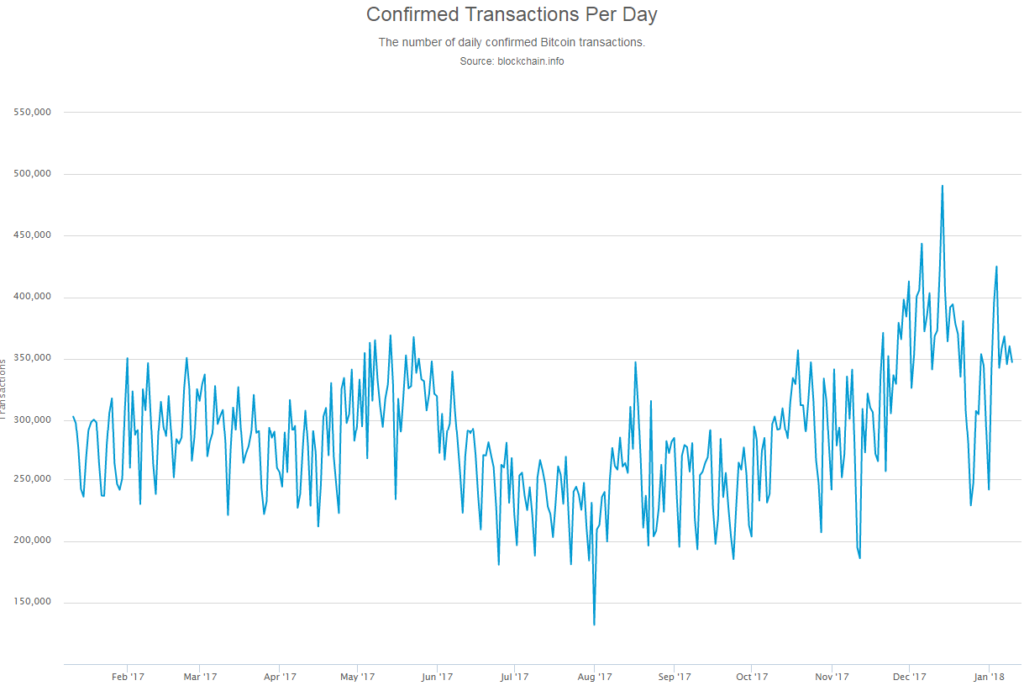 In the 80’s and early 90’s Robert Metcalf and George Gilder were studying the value of communications networks. Their original work applied to telephones, and discussed how a network such as a telephone system that could access 1,000 other phones was more valuable than a phone that could access only a single other phone. In simple terms, Metcalf proposed that the value of any network was proportional to the square of the number of contacts within that network. This was considered an interesting but untestable theory for a while. The theory was finally tested (and proven true) in 2013 and 2015 with datasets from European internet providers and in social networks like the ones owned by Facebook and Tencent. In late 2017, Tom Lee, the cofounder of FundStrat Global Advisors, repeated the Metcalf test on Bitcoin. 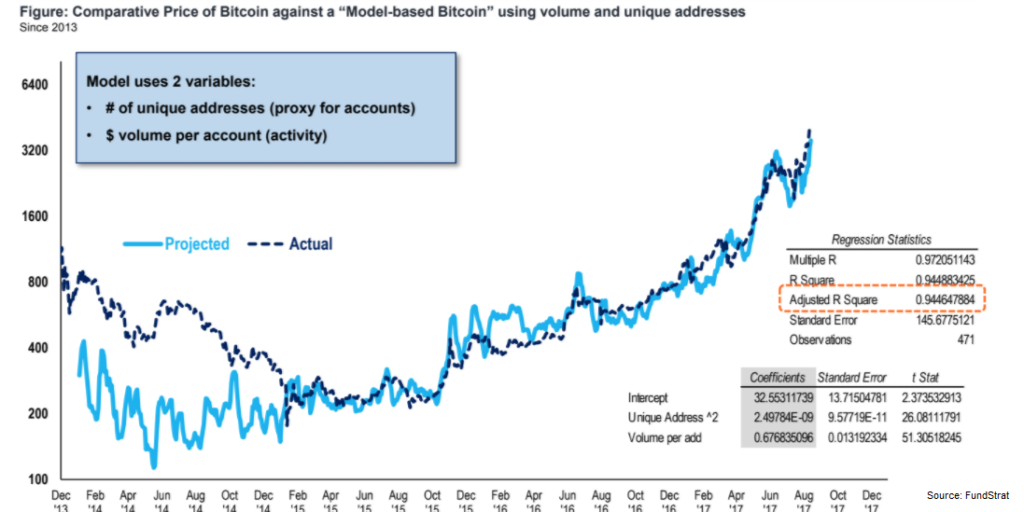 As the above chart shows, Metcalf’s equation can explain over 94% of the move in the price of bitcoin over a period of a few years. Thus, Bitcoin grows more valuable as more people complete transactions in Bitcoin. At its current average of 350,000 transactions per day, Metcalf’s law suggests that Bitcoin should have a market cap of $122 billion. The actual market cap as of 1/25/18 is $189 billion, leading some to fear over-valuation. Others might respond that the rate of adoption could happen faster than anyone anticipates which suggests that the current valuation could be fair. At 7 transactions per second (the current theoretical upper limit) Metcalf’s law suggests BTC should have a valuation of $375 billion, a 62% premium compared to the current valuation.

Beyond Metcalf, many traders have made small fortunes trading Bitcoin and its cryptocurrency siblings based on technical factors. A Tulane University senior who we have interviewed claims to have turned $20,000 into over $1,000,000 through this strategy. Using only technical analysis he sits in front of a monitor watching for a breakout pattern (explosive upwards movement) in a coin, at which point he buys the coin to ride the wave up and then sells once momentum cools. When not actively trading, he prefers to leave his funds in the US Dollar or the coin “Tether” which attempts to maintain price parity with the US Dollar.

For all of its benefits, Bitcoin is not without criticism. Speaking of transactions, Bitcoin has a current upper limit of 7 transactions per second due to its technical design (source: CryptoCompare). This is a far cry from the peak of 47,000 transactions per second that Visa confirmed it processed in 2013 and the difference is the subject of much debate in the Bitcoin community. The issue has inspired its own Wikipedia article (Bitcoin scalability problem), and was the genesis of the creation of several other “alt-coins” which share similarities with Bitcoin. Litecoin and BitcoinCash are two alt-coins that have addressed this issue.

Another issue with Bitcoin’s design is in the “proof of work” network requirement. The peer-to-peer machines that validate transactions consume a vast amount of electric power. According to Digiconomist, a widely followed Bitcoin publication, the Bitcoin network as of January 2018 is on pace to consume 44.28 terawatt hours (TWh) of energy a year, more energy than the entire country of Denmark. Some coins like Ethereum have proposed to use this computing power to run programs and applications. As of 2018, Ethereum is processing over a million transactions a day with a current market cap of $101 billion (Coinmarketcap.com). Other coins like Neo have been developed to use a concept called proof of stake rather than proof of work.

While these cryptocurrencies represent a new evolution of computing and finance, they are not without risks. The biggest current risk at the moment is simply the volatility. For example, Bitcoin at $11,000 in January 2018 is down 41% compared to its previous high of $19,780 in December 2017. The volatility is a product of the current relatively low market cap, and the ability for large traders to have huge influence over the aggregate price.

Further risks involve the “middlemen” who run exchanges. The largest exchange in 2014, MtGox, went bankrupt with accusations of fraud and hacking surrounding it. Many who held their coins on the exchange lost their holdings. Other exchanges have experienced hacks and interruptions of service. Even if the crypomarket does become the future, there is the risk that Bitcoin is the “Myspace” of the crypto world that will eventually be replaced by another coin like Facebook replaced Myspace. Risks are inherent in all investments, and the suitability of any investment depends on the risk tolerance of the investor.

Jamie Dimon, for what it’s worth, has since stated he regrets calling bitcoin a fraud, and now agrees that the “blockchain is real.” He still maintains concerns over how governments will react once Bitcoin grows large enough to represent a real challenge to the current financial system. Hundreds have already been arrested for money laundering and other failures to follow regulations. Foreign governments, mostly in Asia, have at times banned or threatened to ban the currency, sending shockwaves through the exchanges.

Just last week, the SEC’s Director of Investment Management Dalia Blass asked sponsors to refrain from initiating registrations for funds investing in cryto-related funds citing “a number of significant investor protection issues that need to be examined before sponsors begin offering these funds to retail investors.” Others, however, are not waiting for clear regulatory approval. Don Steinbrugge, Agecroft Partners managing partner, says there are already 150 crypto and bitcoin hedge funds. HFR, a leading hedge fund research organization has created their own cryptocurrency index. This index of cryptocurrency hedge funds earned +2,972%, over double the return of bitcoin itself, for the single year 2017. Whatever the future holds for bitcoin, those who ignore the cryptocurrency market risk being left behind.

In the 80’s and early 90’s Robert Metcalf and George Gilder were studying the value of communications networks. Their original work applied to telephones, and discussed how a network such as a telephone system that could access 1,000 other phones was more valuable than a phone that could access only a single other phone. In simple terms, Metcalf proposed that the value of any network was proportional to the square of the number of contacts within that network. This was considered an interesting but untestable theory for a while. The theory was finally tested (and proven true) in 2013 and 2015 with datasets from European internet providers and in social networks like the ones owned by Facebook and Tencent. In late 2017, Tom Lee, the cofounder of FundStrat Global Advisors, repeated the Metcalf test on Bitcoin.