For most researchers working in neuroscience, the Holy Grail is to discover how to regenerate the neurons of the brain. Such a feat would help scientists put an end to diseases such as Parkinson’s, Alzheimer’s and many forms of dementia. But others are taking the techniques of this growing field and applying them to behavioral finance, itself a mash-up of economics and psychology. The result is a new field called neuroeconomics, which attempts to explain how people manage risk and why they often make irrational decisions.

That emotions play a powerful role is nothing new. Benjamin Graham, considered the father of value investing, once said, “Individuals who cannot master their emotions are ill-suited to profit from the investment process.” But the core theories of the field now known as Behavioral Finance were developed by Daniel Kahneman of Princeton University, whose work, with the late Amos Tversky, won him the Nobel Memorial Prize in Economic Sciences in 2002. Kahneman and Tversky found that people suffer a higher degree of pain from losing money than they feel pleasure from making money. So they tend to hold on to losing stocks rather than sell and lock in a loss.

R.J. Weiss, the 26-year-old founder of the blog Gen Y Wealth, recently posted that he got caught in a behavior trap. When his grandfather passed away, he inherited shares trading at $25. As the shares fell to $20, to $10 and then to $5, Weiss couldn’t bring himself to part with his grandfather’s gift. Finally, in April, he sold at $3.04, locking in a 90 percent loss. “The entire time the stock plummeted, I knew [that holding] was the wrong thing to do. But I couldn’t get myself to sell it,” wrote Weiss. Irrationality can take the form of an emotional attachment to an inanimate asset.

John Coates, a senior research fellow in neuroscience and finance at the University of Cambridge, has a theory. He says there would be fewer stock market bubbles and crashes if women and older men handled most of the trading. “There is less diversity in the financial world than in the military,” he quips. “On Wall Street, we have one slice of the population — young men — running our trading floors. That leads to extreme behavior: They go wilding.” Wilding is not good for stocks. Such behavior likely contributed to the Internet crash in 2000 and the subprime-fueled crash of 2008-2009.

In 2007, Coates went to a trading floor and took repeated saliva samples from 250 traders, mostly young men. He found that in the mornings, when their testosterone levels were high, the traders’ confidence was also high. As they made winning trades, their testosterone levels rose even higher, leading to profits in the afternoon. The young men began to feel infallible, indulging in increasingly risky behavior, such as buying shares of overvalued stocks. But eventually too much testosterone, too much impaired judgment, would drive markets to unsustainable heights. Then the cycle could end. The overvalued stocks would crash and the testosterone levels would return to normal. “Testosterone is the molecule that explains irrational exuberance,” says Coates. “A certain amount of testosterone can be healthy, but too much can lead to a bubble.” A more immediate solution may come from John Coates’s research: Adjust the mix of traders to include more women and older men.

Investors with the biggest appetite for risk have increased brain activity in an area called the nucleus accumbens. That’s the part that lights up in an animal when it finds food or in a predator when it goes for the kill. At the same time, there’s a surge in the feel-good chemical dopamine. It floods your brain when you anticipate doing something pleasurable or exciting such as sky diving, listening to music or having sex. A dopamine high can cause investors to engage in risky behavior.

However if going really wild means moving from a three month Treasury bill to a one-year certificate of deposit, you’re probably suffering from Irrational Prudence Syndrome, a non-medical but widespread condition that results from overexposure to volatile markets. IPS is characterized by extreme aversion to equities and uncontrollable urges to stuff cash into government guaranteed mattresses, be it a CD, a Treasury security or even a checking account. It’s a syndrome financial firm’s dread, and one they are determined to cure. Left untreated, IPS can lead to poorer investors — and frustrated advisers.

The answer is: yes and yes. 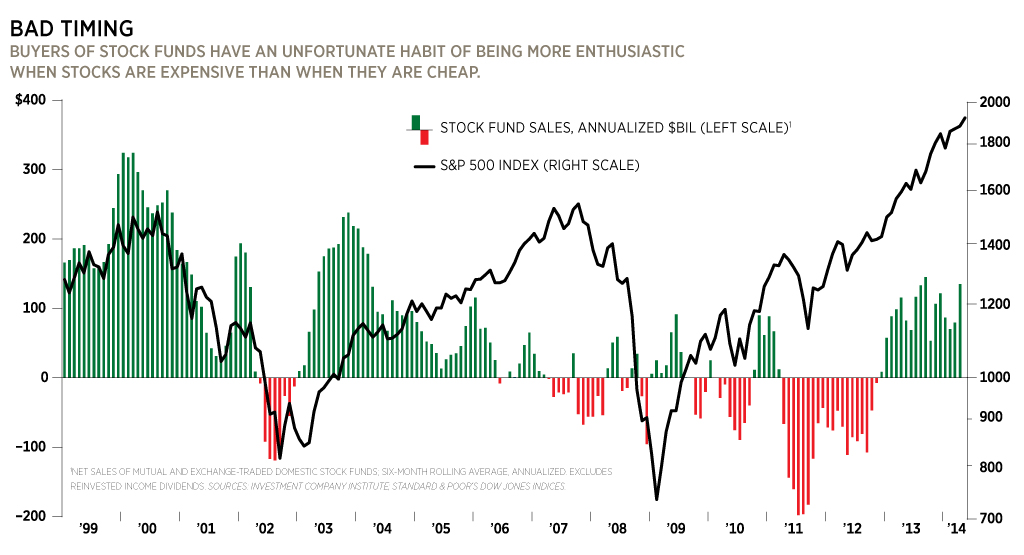 There is ample evidence that popular expectations for investment returns are just about the opposite of what would come from a sober analysis of the fundamental data. In 2000, when the market was trading at absurdly high multiples of corporate earnings, funds holding U.S. stocks hauled in $288 billion. In 2002, when stocks were cheap, the inflow slowed to a $13 billion trickle, then went negative.

The inflow into stock funds dried up once again after the crash of 2007-09 and stayed low for most of the next five years. Now, with stock prices at abnormally high multiples of earnings, the investing masses are again putting big money into stock funds.

It’s the same with high yield bonds. A rational investor would be most likely to buy risky corporate debt when the reward–the yield–is highest and least likely when it is meager. The public is doing just the opposite. 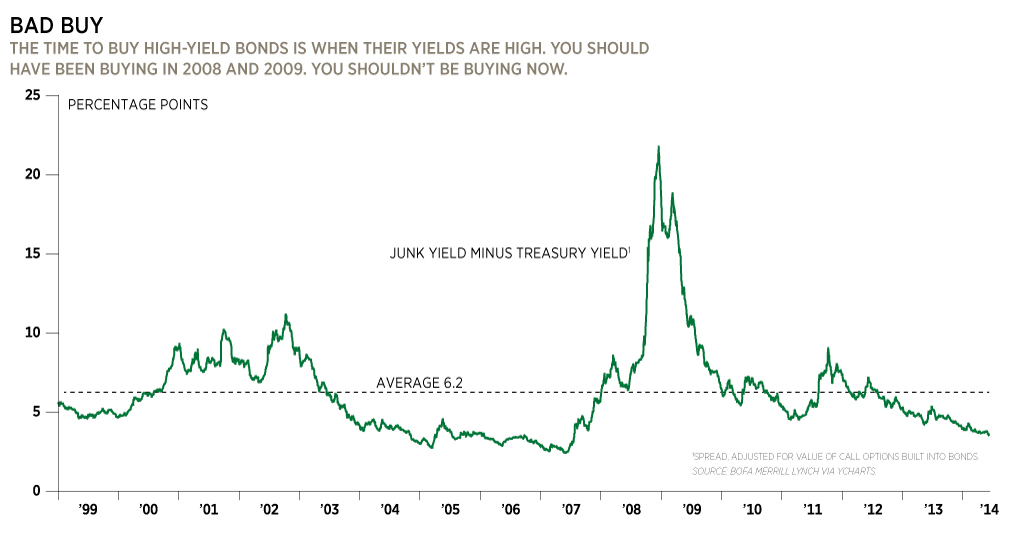 In tumultuous 2008, when high yield bond prices were depressed, their yields averaged a 10% premium over safe Treasury paper. That was a good time to be buying. But retail investors were doing more selling than buying. That year high yield funds saw $6 billion of net redemptions, not counting reinvestment of dividends, according to data from the Investment Company Institute.

Six years later the prices of risky bonds have recovered, and their yields are correspondingly lower. What are investors doing? They should be selling, but they are not. In 2013, when the yield premium on average was only half that of 2008, investors poured a net $54 billion into high yield funds. The money is still coming in ($10 billion in the first four months of this year).

The pattern: If an asset class has done well recently, making its price high, fund buyers want it. If it has done poorly, making it a bargain, they want to sell.

The phenomenon described above anecdotally has been studied statistically. Two Harvard professors, Andrei Shleifer and Robin Greenwood, published a paper last year demonstrating that investor expectations are highest when objective models would say that expected asset returns are lowest, and vice versa.

You don’t have to make that mistake. There are better ways to come up with a forecast of future returns than to extrapolate the recent past. Experts can differ about how to come up with an expected return from an asset. But one thing they would agree on is that recent performance is a bad indicator of future results. You shouldn’t be buying an asset class just because it has been going up.

Indispensable wisdom: Buy at the point of maximum pessimism; sell at the point of maximum optimism.  Templeton, a committed contrarian, believed the only way to get a bargain in the stock market was to buy when everyone else was selling: At the outbreak of World War II, when everyone else was panicking, he bought shares in every NYSE-listed company that was trading for less than $1–and made money on nearly all of them.

Indispensable Wisdom: Only invest in what you understand and at the right price. Whether socks or stocks, I like buying quality merchandise when it is marked down.

Indispensable Wisdom: Information is money. Thanks to his extensive network of carrier pigeons Rothschild knew that England had defeated France at Waterloo before anyone else in London. As other traders on the stock exchange braced for a British loss, he went long.  Rothschild’s father planted the seeds for the 19th century’s greatest banking empire by stationing each of his five sons in different European cities. Nathan got London, but throughout his career he was able to profit from the insights of his brothers in Frankfurt, Paris, Naples and Vienna.

The message for investors is not to “guess” where markets are in the cycle or wait for bottoms to invest or tops to sell since they can be years away. The lessons from these sage investors with their “indispensable wisdom” are not to sell in bad markets and not to try and “time” the market.  As John Templeton also said; “It’s not timing the market; it is time in the market that builds long term wealth”.