Back in the USA

As a proud member of the Baby Boomer generation, I can remember the surprise when the large bulge of population arrived at grade school, and there was no capacity in the school system. Portable buildings were erected to house the surplus students and a scramble for teachers ensued. When I got to junior high (now called middle school) there was the same surprise. High school yielded the same surprise. This is odd to think that a trend so slow would be a surprise. After all the population movement was only one year per year. Years later the lack of student population from the Baby Bust caused the closing of schools which came as another unforeseen surprise to the school system.
From 2008-2012, GDP growth was 9.0% and during 2012 it was 7.8%. GDP for the first quarter of 2013 was recently reported at 7.7% and was largely a disappointment.

We are witnessing a similar phenomenon as the Emerging Markets of the world, led by China, develop, grow, and emerge. Running on a parallel track with the industrialized nations, China is going through the industrial revolution, the technological revolution, and the internet revolution simultaneously. As experienced by the developed countries of the West, the population ratio of 20% city dwellers to 80% farmers will be reversed. This is a population shift that will dwarf the Baby Boom. 80% of the Chinese population is over a billion people, more than three times the entire US population.

The new factory workers in the cities will become a growing middle class and will start to consume. What we are seeing in China is an economy that is switching gears. It is transitioning away from production and export, toward a consumption driven economy. The new administration in China wants this change to occur over time. Domestic consumption as a percent of GDP is significantly lower in China than developed economies, but is on the rise. We believe this transition will result in GDP growth coming in well below recent historic rates.

For domestic consumption as a percentage of GDP to increase significantly, it needs to grow much faster than overall GDP, which in turn means that the fixed asset investment portion of the economy needs to grow much slower. We expect this transition to make China a challenging environment for growth for some time. While we do not expect all of China to be problematic, we believe that future growth will be reliant on the emerging Chinese consumer, and not as much on resource consumption.

From a macroeconomic perspective, we believe global GDP growth for all the Emerging Markets will be slower for the foreseeable future and that China is a primary example. In China, GDP growth has been declining since 2007. 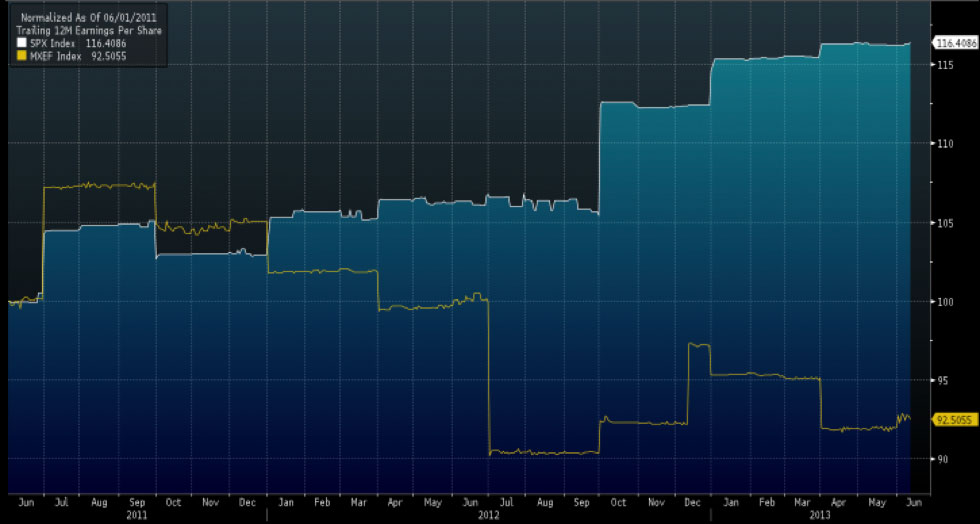 Even though the emerging markets are growing at much faster rates than developed markets, we don’t think that is going to translate into stock performance from here and the domestic companies doing business in the Emerging Markets will have an advantage.

The difference between emerging market and developed market economic growth is quite stark. Unfortunately in the developed world economic growth is much slower than the emerging world. The US is in a slow 1%-2% growth environment at best. Much of Europe is in recession with some members even depression, and Japan is mired in a decade-long stagnation. All three are attempting to manufacture growth via loose monetary policy. But in terms of aggregate growth, the developed world is not going to grow its way out either. While Quantitative Easing (QE) has been effective in re-inflating asset prices, we believe it will prove to have a continued, although diminishing impact on economic growth. What the developed countries need is a growing source of new consumers.

70% of the US economy is driven by the consumer. At the highest end, the developed market consumer is doing quite well, while the average consumer is struggling with elevated unemployment and wages which are stagnant at best. The emerging market consumer is less well understood, but a rapidly growing population boom.

So how do investors make money from this new consumer growth? From a fundamental point of view, US equities appear far more attractive than emerging market equities. 40% of the earnings of the companies in the S&P 500 now come from offshore. For example, these 6 American based companies are all heavily involved in global and emerging markets.

Exxon-Mobile (XOM) – 81% of Exxon-Mobile’s total sales are from foreign markets.

IBM (IBM) – IBM derives 56% of its total revenue from outside the Americas.

Caterpillar Inc. (CAT) – CAT generates 63% of its total revenue from outside North America.

Pfizer (PFE) – In the drug market, the compound annual growth rate (CAGR) for aggregate sales in emerging markets is expected to be 12%-15% for the 2012-2016 period. Over this same period, the global drug market’s dollar value is expected to have a CAGR of 3%-6%. (Information was obtained from the S&P Stock Report. Revenue and sales data are from 2012.)

We believe US companies are better positioned to capture the consumer expansion in a low growth world for the following reasons:

This emerging market consumer boom may not come at as predictable a pace as the one year per year US baby boom, but it is coming. It should be a big benefit to the consumer oriented economies of the developed countries of the West. One factor that could slow down this trend would be another global recession. However, even the Great Recession of 2008 only delayed the development, and did not derail this trend.